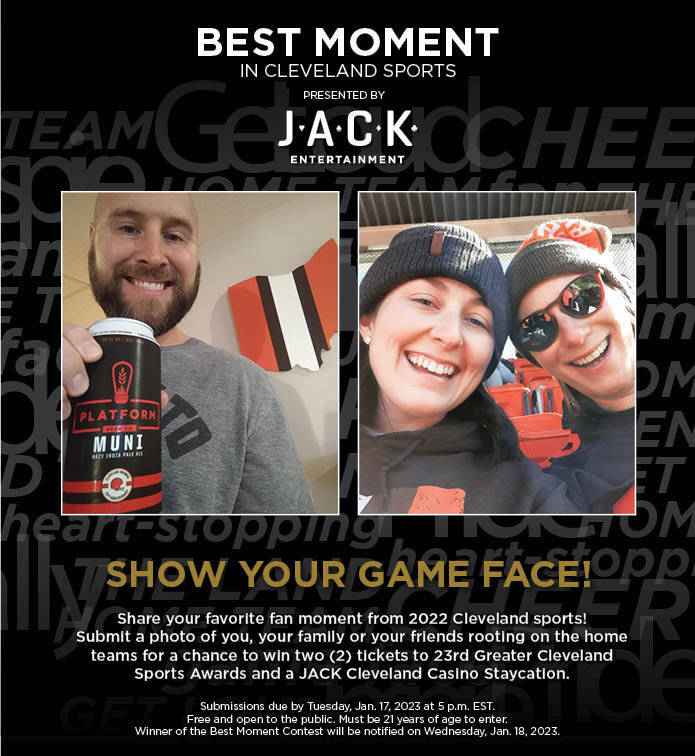 For this year’s contest, we're encouraging local sports fans to share their favorite fan moment from the 2022 Cleveland sports season. Submit a photo of you, your family or your besties, rooting on the home teams for a chance to win two (2) tickets to 23rd Greater Cleveland Sports Awards and a JACK Cleveland Casino Staycation.

Contest will open soon! Check back soon, but in the meantime, get your game face photos ready!

2022 Best Moment in Cleveland Sports presented by JACK Entertainment celebrates the most iconic sports achievement from the previous year and will be announced live during 23rd Greater Cleveland Sports Awards on Wednesday, Jan. 25, 2023 at 7 p.m. at Rocket Mortgage FieldHouse.

Two (2) tickets to the 23rd Greater Cleveland Sports Awards. A complete list of what's included with each ticket can be found here.

The deadline to enter submissions will be Tuesday, Jan. 17, 2023 at 5 p.m. EST. Submissions are free and open to the public. Must be 21 years of age to enter. Winner of the Best Moment Contest will be notified on Wednesday, Jan. 18, 2023.

The 2021 Best Moment in Cleveland Sports presented by JACK Entertainment was awarded to the Cleveland Browns for the 2021 NFL Draft in The Land during the live awards show on Wednesday, Mar. 23, 2022.