2021 NFL DRAFT TO BE HOSTED IN CLEVELAND 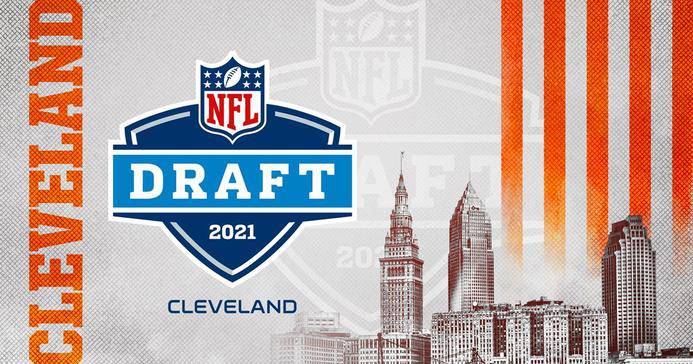 CLEVELAND - The 86th NFL Draft will take place in Cleveland in 2021 and will bring fans together for free celebrations at iconic downtown locations around FirstEnergy Stadium, including the Rock & Roll Hall of Fame, as well as on the shore of Lake Erie, as announced by the NFL on May 22, 2019.

The announcement was made at the annual Spring League Meeting in Key Biscayne, Fla. following a review of the proposal by the Super Bowl & Major Events Advisory Committee and full ownership.

The Cleveland Browns, Greater Cleveland Sports Commission, City of Cleveland and Destination Cleveland will host a 2021 NFL Draft press conference at 3 p.m. in Public Square tomorrow (May 23), complemented by a free fan tailgate.

“Cleveland has a passionate fan base and the city offers distinctive iconic locations and attractions that will bring the NFL Draft experience to fans in unique and exciting ways,” said NFL Commissioner Roger Goodell. “We look forward to collaborating with the Cleveland Browns, the City of Cleveland, Greater Cleveland Sports Commission and Destination Cleveland to celebrate the achievements of the next generation of players and create a memorable fan experience.”

As part of the event, the free NFL Draft Experience – a massive free football festival – will enable fans of all teams to participate and test their football skills, enjoy interactive exhibits and autograph sessions, and take pictures with the Vince Lombardi Trophy. The Draft Experience will be open all three days of the event.

The Cleveland Browns, who played their inaugural season in 1946, will also be celebrating their 75th anniversary throughout 2021.

“We are incredibly honored to be able to showcase the City of Cleveland and the passion of Browns fans through the unique international platform the NFL Draft provides,” said Dee and Jimmy Haslam. “This is an exceptional opportunity for Northeast Ohio that even extends beyond football, and we look forward to continuing the work ahead with Greater Cleveland Sports Commission, the City of Cleveland, Destination Cleveland and the NFL to ensure that the 2021 NFL Draft is truly memorable for Northeast Ohio and football fans across the world.”

“The City of Cleveland welcomes the 2021 National Football League Draft,” said Mayor Frank G. Jackson. “We are home to the Cleveland Browns and well-known as a city with passionate sports fans. Visitors will find Cleveland has an unmatched ability to provide Midwestern warmth and hospitality coupled with the amenities found in other major cities. We look forward to hosting the Draft and once again showcasing Cleveland’s ability to organize successful, world-class events.”

“Cleveland is honored to be selected as the host city for the 2021 NFL Draft and we are excited to once again show the world that this city can set a standard for hosting some of the world’s largest events,” said David Gilbert, President and CEO of Greater Cleveland Sports Commission. “This event will provide international media exposure and has proven to provide more than $100 million in economic impact to the host city. We look forward to showing NFL fans across the nation how Cleveland throws a party. Being awarded the 2021 NFL Draft wouldn’t have been possible without the unwavering commitment of the Cleveland Browns, the support of the City of Cleveland and Cuyahoga County and so many others who helped make this a reality. As Cleveland continues to shine in the national spotlight with the unique opportunity to host four major sporting events over the next six years, including the Draft, we are proud of this achievement which few destinations are able to accomplish.”

The NFL Draft has become one of the biggest and most-anticipated sporting events of the year. The 2019 Draft reached new heights and record numbers as the highest-rated and most-watched Draft ever, eclipsing previous records set in 2018. The 2019 Draft was broadcast over three days and attracted more than 47.5 million total viewers and over 600,000 in attendance. The NFL Draft achieved a combined 3.9 HH rating and average of 6.1 million viewers across the broadest distribution including NFL Network, ABC, ESPN, ESPN2 and ESPN Deportes, as well as NFL and ESPN digital and social properties.