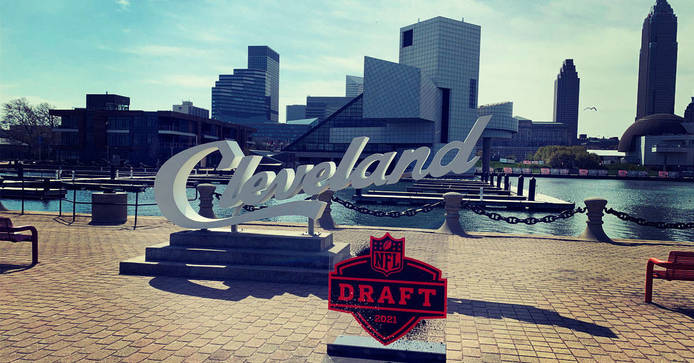 WHAT: As Cleveland prepares to host the 2021 NFL Draft on April 29 – May 1, locals and visitors will notice Draft signage across iconic locations around Downtown and surrounding neighborhoods.

“As with every major event, our team places an emphasis on local engagement and providing a warm welcome to visitors upon arrival at the airport all the way through their journey into our Downtown,” David Gilbert, President and CEO of Greater Cleveland Sports Commission and Destination Cleveland. “Our beautiful community and the surrounding areas are activated with signage to garner excitement for the 2021 NFL Draft and so that all of Cleveland looks and feels a part of this event as prospects take the Draft stage.”

Among the highlights, Terminal Tower, managed by K&D Group, will be activated on Draft Nights 1 and 2. The historic tower will be illuminated with colors respective to each of the 32 NFL teams during their time on the Draft clock. Additionally, each team’s logo will be featured as a projection on the tower.

Other areas of activation for fan engagement include all six Cleveland script signs, Downtown’s E. 4th Street, the casino pedestrian walkway located at Prospect and Ontario and RTA’s E-Line Trolley.

In addition to these activated areas, signage including pole banners, RTA bus shelter wraps and sidewalk kiosks are being placed around Downtown and surrounding areas to connect our neighborhoods to the NFL Draft.

Fans and media are encouraged to share photos on social by tagging @nfldraft account and use hashtags #NFLDraft and #thisisCLE.