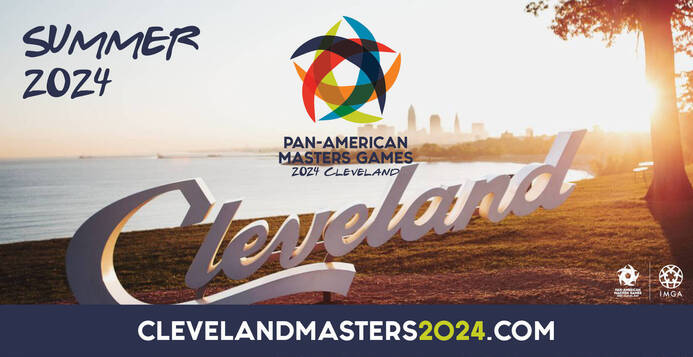 CLEVELAND – Greater Cleveland Sports Commission announced the 2024 Pan-American Masters Games (PAMG) will be held on July 12-21, 2024 in Northeast Ohio. This multisport event for athletes is expected to be the largest international gathering in Northeast Ohio’s history bringing over 7,500 athletes from more than 50 countries along with thousands of spectators, family and friends. This event will provide over $18 million in economic impact to the local economy.

As this will be hosted for the first time in the United States, PAMG is an Olympic-like sports festival for masters athletes, those competing at over 30 years old. Held every four years in the Americas, the Games will feature up to 30 medal-contending sports including track and field, tennis, basketball, pickleball and cycling. A full list of sports and disciplines will be announced this fall.

“The 2024 Pan-American Masters Games will continue to build upon Cleveland’s long legacy and unique ability to host large multisport events such as 2004 International Children’s Games, 2013 National Senior Games, 2014 Gay Games and 2016 Transplant Games of America,” said David Gilbert, President and CEO of Greater Cleveland Sports Commission. “The Games, which will be the largest international event in our city’s history, will continue to showcase Cleveland as one of the top U.S. cities for hosting major events.

The Games will continue to further the mission of Greater Cleveland Sports Commission, to provide economic impact to Northeast Ohio in the form of sporting and competitive events, bringing our current impact to over $850 million.”

During today’s event, major partners supporting the Games were announced including the Junaid Family Foundation, Supply Side U.S.A. and TransDigm.

Additionally, the Cleveland community was encouraged to get involved with PAMG by either participating as an athlete, volunteering, as spectators or through corporate support. More information on involvement will be available on clevelandmasters2024.com in the coming months.

“As a non-profit organization promoting an active lifestyle, finding the right partner is essential. Cleveland, as a compact city, has great venues and outdoor sport areas," said Jens V. Holm, CEO of IMGA. “During the global pandemic, it has become even more apparent that staying fit and having an active lifestyle is important. Participating in sports regularly not only keeps you healthy and fit. It also has a positive impact on your mental health and allows parents and grandparents to serve as role models for the younger generations.

“Cleveland understands this very well and I am confident they will do a great job delivering a unique event for the Masters community around the world."

To further show community support of this international event, Terminal Tower, managed by K&D Group, will be activated tonight, Aug. 30. The historic tower will be illuminated with PAMG brand colors which can be found in the event’s logo.