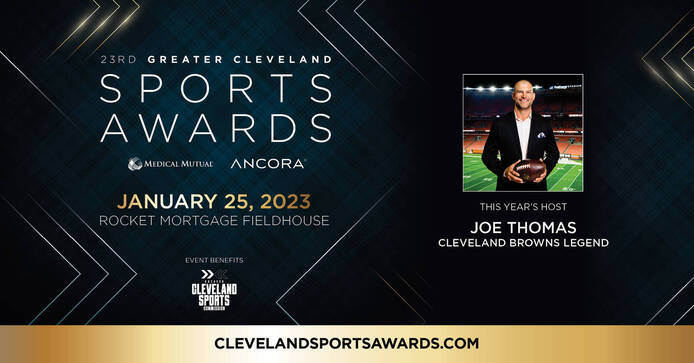 Cleveland’s sports scene will gather for a night of networking, libations and appearances from local and national sports celebrities. It will feature a live awards show led by Thomas and mirrored on the venue’s big screen.

Guests will enjoy a cocktail hour presented by Medical Mutual and Ancora in the RMFH Atrium including a Silent Auction presented by Physicians Ambulance, open bar and high-end food stations. Following the hour, guests will head to their seats for refreshments, drinks compliments of Beverage Distributors and Miller Lite, and a fully produced awards program. The awards show will be followed by the After Party, courtesy of Westfield, featuring martini and dessert bars, food stations and a live DJ.

Award nominations will be selected in the following categories:

This year’s host, Thomas, was an NFL offensive tackle for the Cleveland Browns after being chosen by the club as the third overall pick in the 2007 NFL Draft. During his tenure with the team, Thomas was selected to Pro Bowl every season and did not miss a single play in his career until the 2017 season. His 10,363 consecutive snaps played is the longest streak since the NFL began recording snap counts in 1999.

Thomas is a 10x Pro Bowl and 9x All Pro selection. He played college football for the University of Wisconsin, earned unanimous All-American honors, and was recognized as the top college interior lineman.

This September, the Cleveland Browns inducted Thomas into the teams’ Legends program at halftime during the Browns v. Jets game.

Tables are available for purchase with prices ranging from $11,500 to $4,000 and guarantee purchaser 10 seats, a cocktail hour, refreshments during the show and the after party.

Individual tickets will be available starting early November for $350 and include cocktail hour, refreshments during the show and after party access.

For more information or to purchase a table, visit clevelandsportsawards.com.