Our team at GCSC knows that the year has been a difficult time... more

It’s Week Fifteen and we’re back with another Good News in Sports: Team... more

Welcome to Week Fourteen of Good News in Sports! The good news this... more

We’re back with Week Thirteen of Good News in Sports! As promised, every other... more

Welcome to Week Twelve of Good News in Sports. It's gearing up to... more

Welcome to Week Eleven of Good News in Sports! In times of uncertainty, we... more

Welcome to Good News in Sports: Week Ten! As we navigate this temporary ‘new... more

Welcome to Week Nine of Good News in Sports! In times of uncertainty, we... more

Welcome to Good News in Sports: Week Eight! We hope everyone enjoyed this beautiful... more 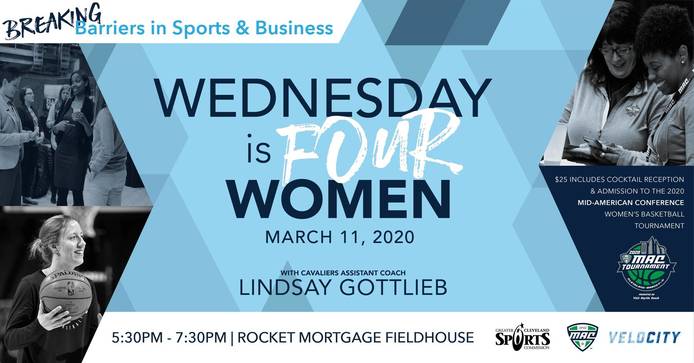 CLEVELAND, OH — Greater Cleveland Sports Commission and Mid-American Conference will host Wednesday is FOUR Women on Wednesday, March 11, 2020 from 5:30 p.m. to 7:30 p.m. at Rocket Mortgage FieldHouse. This event will feature a discussion with Lindsay Gottlieb, Cleveland Cavaliers Assistant Coach, who will be interviewed by Cavaliers sideline reporter Angel Gray of Fox Sports Ohio.

During the “Breaking Barriers in Sports & Business” event, attendees will hear discussion centered around women working in the sports business industry, the journey to Cleveland’s hosting of 2024 NCAA Women’s Final Four and what to expect during the Championship.

During her tenure, Gottlieb led Cal to seven overall NCAA tournament appearances (2012, 2013, 2014, 2015, 2017, 2018, 2019), including the program's first-ever Elite Eight and Final Four appearances in 2013. That same year, she was named Pac-12 Coach of the Year by media and was a Naismith National Coach of the Year Finalist, while also guiding the Golden Bears to their first Pac-12 Regular-Season Championship. Gottlieb coached five Cal players to 10 total All-American seasons and saw six of her players become WNBA Draft selections during her time as head coach. She holds 11 overall years of Division I head coaching experience, posting a 235-128 (.647) overall record with Cal and UC Santa Barbara (2008-2011).

Tickets are available for purchase online for $25 and include a cocktail reception, exclusive interview with Lindsay Gottlieb and Angel Gray and a ticket to the 2020 Mid-American Conference Women’s Basketball Tournament at Rocket Mortgage FieldHouse following the interview.

Wednesday is FOUR Wednesday is part of Greater Cleveland Sports Commission’s community-wide Velocity initiative to support and maximize the community impact of hosting some of the most significant events in sports, including 2024 NCAA Women’s Final Four.

About Greater Cleveland Sports Commission: Since 2000, Greater Cleveland Sports Commission (GCSC) is responsible for attracting over 200 sporting events which provide more than $811 million in economic activity to Northeast Ohio. GCSC supports the local economy, utilizes sports as a vehicle to forward community agendas and maintains a goal of producing events that are more successful when held in Cleveland than in other cities. For more information, visit clevelandsports.org.

About Mid-American Conference: Founded in 1946, the Mid-American Conference is an NCAA Division I, 12-member conference that sponsors 23 championships and is one of 10 members of the Football Bowl Subdivison (FBS). With total enrollment of nearly 300,000 students, the league represents institutions of higher learning in five states - Illinois, Indiana, Michigan, New York, and Ohio.

About Velocity: Velocity is a community-wide initiative of Greater Cleveland Sports Commission to support and maximize the community impact of hosting some of the most significant events in sports. Cleveland is host of the 2019 MLB All-Star Week, 2021 NFL Draft, 2022 NBA All-Star Weekend and 2024 NCAA DI Women’s Final Four. Community events provide opportunities to extend each event’s footprint in Northeast Ohio. These programs will highlight important social issues such as diversity and inclusion and provide opportunities to underserved populations.

More information about Velocity can be found at velocitycle.org.