Kevin Love is our Humanitarian of the Year for 21st Greater Cleveland Sports... more

Learn more about Camryn's journey of courage at clevelandsports.org/courage more

Naz Hillmon is our 2020 Female Collegiate Athlete of the Year for 21st... more

Mike Rose is our 2020 Male Collegiate Athlete of the Year for 21st... more

Paige Floriea is our 2020 Female High School Athlete of the Year for... more 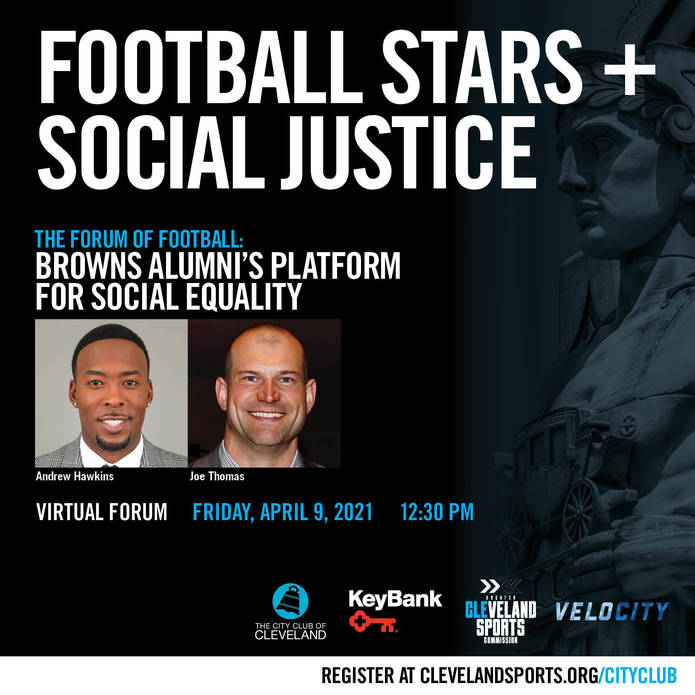 CLEVELAND - Greater Cleveland Sports Commission and The City Club of Cleveland to host Joe Thomas and Andrew Hawkins, former Cleveland Browns, as part of the KeyBank Diversity Thought Leadership Series on Friday, April 9, at 12:30 p.m. for The Forum of Football: Browns Alumni’s Platform for Social Equality.

This virtual event will feature a conversation between Thomas and Hawkins, moderated by the City Club’s Dan Moulthrop, about the duo’s NFL careers and how they continue to use their platforms to drive awareness of important social justice topics across sports, education and within the community.

Cleveland Browns’ former teammates are co-hosts of the popular “The ThomaHawk Show” podcast in addition to their current roles as NFL analysts.

Thomas is a 10-time Pro Bowl selection and holds the NFL record for consecutive offensive snaps played (10,363 consecutive) which he achieved during his 11-year career at left tackle with the Browns. He is a two-time Browns Walter Payton Man of the Year honoree (2010 and 2016), which recognizes a player’s excellence in the community and on-field performance.

Hawkins began his professional football career with the Canadian Football League’s Montreal Aloutettes before joining the NFL in 2011, playing first for the Cincinnati Bengals and then signing on with the Cleveland Browns in 2014. Hawkins also serves as the Director of Business Development for The SpringHill Company, a video production and entertainment organization led by LeBron James and Maverick Carter.

The forum will be live on 90.3 WPCN and livestreamed on cityclub.org at 12:30 p.m. on April 9, 2021. It will also be digitally archived at cityclub.org. Free registration is available online.

As part of Velocity’s community programming, this annual speaker series will be hosted by the historic City Club of Cleveland, featuring pioneers in sports to discuss topics such as athlete activism, social justice, women in sports, LGBTQ+ and minorities in professional sports.

Velocity is a community-wide initiative of Greater Cleveland Sports Commission to support and maximize the community impact of hosting some of the most significant events in sports. In addition to the 2019 MLB All-Star Week, Cleveland will host the 2021 NFL Draft, 2022 NBA All-Star Weekend and 2024 NCAA DI Women’s Final Four. Community events provide opportunities to extend each event’s footprint in Northeast Ohio. These programs will highlight important social issues such as diversity and inclusion and provide opportunities to underserved populations.

More information about Velocity can be found at velocitycle.org.

WHERE: Virtual event livestreamed on cityclub.org

About The City Club of Cleveland: The City Club of Cleveland is one of the nation’s great free speech forums. A product of the Progressive Era, it was founded in 1912 and is one of the nation’s oldest continuous independent free speech forums, renowned for our tradition of debate and discussion. For more than a hundred years, all speakers, from sitting presidents to community activists, have answered unfiltered, unrehearsed questions directly from an audience. Its mission is to crate conversation of consequence that let democracy thrive. For more information, visit cityclub.org.