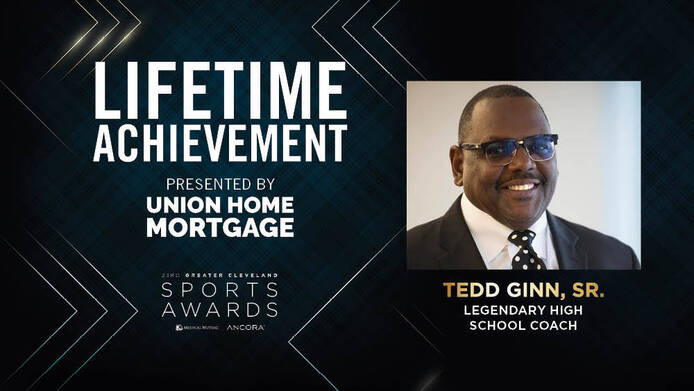 Ginn has served as head football coach of the Glenville Tarblooders since 1997. His nationally recognized coaching program, Winning and Building a Team Against All Odds, led the Cleveland Metropolitan School District (CMSD) team to its first state title during Ohio State Athletic Association’s (OHSAA) Division IV championship game against Cincinnati Wyoming on Dec. 3, 2022 at Tom Benson Hall of Fame Stadium.

Prior to securing the Tarblooder’s first state title in school history, Ginn helped establish the Ginn Academy, an all-boys high school for urban youth in the greater Cleveland area, in 2007.

Additionally, Ginn coached Ted Ginn, Jr., his son and former wide receiver, who played in the NFL for 14 seasons with the Miami Dolphins, San Francisco 49ers, Arizona Cardinals, Carolina Panthers, New Orleans Saints and Chicago Bears. Prior to his career in the NFL, Ginn Jr. earned USA Today #1 Defensive Player, Defensive Player of the Year and Number One Hurdler in the Nation while attending Glenville High School.

As of 2022, 22 National Football League (NFL) players from Glenville have gone through Ginn’s coaching and mentorship program.

Ginn has been featured in Sports Illustrated, The New York Times, The Boston Globe, Who’s Who in Black Cleveland and Your Teen Magazine. He received the Double Duty Dad Award from the National Fatherhood Initiative (2008), was recognized by the Ohio High School Football Coaches Association for achieving 200 victories at Glenville High School (2019) and is ranked in the top 100 of all time for victories as an OHSAA coach.

During his tenure as football coach at CMSD, Ginn led the Tarblooders to eight consecutive Senate Athletic League wins between 1997 to 2009. Additionally, Glenville became the first CMSD school to reach the state playoffs, making 10 subsequent appearances from 2000 to 2010. This marked the first time a Senate Athletic League team was ranked in Cleveland.com’s Top 25 multiple times.

In 2002, Ginn was named head coach of the Glenville High School Boys’ Track team leading them to five state championship titles between 2004-2007, 2014 and most recently in 2022, where they gained their first Division II win.

Ginn was named head coach for the 2006 All-American Bowl, a high school football all-star game, where he secured a win for the East. That year he was also awarded Man of the Year from the National Association of Negro Business and Professional Women’s Clubs, Inc., High School Football Coach of the Year by the National Black Coaches’ Association and was inducted into the Glenville High School Hall of Fame.

Ginn is a member of the Cleveland YMCA Board of Trustees and the Collinwood Neighborhood Village Development Corporation. He also serves as a trustee for the National Association for the Education of African American Children.

Ginn and his wife, Jeanette, live in Cleveland and are proud parents of two children, Tiffany and Ted, Jr. and three grandchildren, Theodore III, Kyrsten and Kendall.

Lifetime Achievement Award presented by Union Home Mortgage is given to a person who has dedicated their lives to the advancement of sports in Cleveland. Past recipients have ranged from former Guardians’ franchise greats and Browns legends to high school football coaches in the region.

Hosted by Joe Thomas, Cleveland’s sports scene will gather for a night of networking, libations, appearances from local and national sports celebrities and a live awards show mirrored on the venue’s big screen.

Individual tickets and tables for Sports Awards are available for purchase at clevelandsportsawards.com.